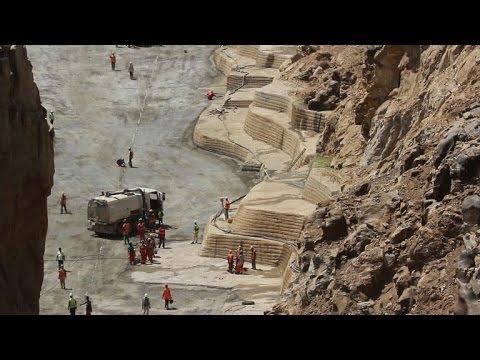 Men work to build a flood barrier to protect their houses from the rising water of the White Nile River in South Khartoum, Aug. 26, 2013. (photo by REUTERS)

CAIRO — Egypt is continuing to develop relations with South Sudan in an effort to protect Egyptian water interests within its borders, through which the White Nile flows. This comes at a time when the dispute between Cairo and Addis Ababa over the Nile’s waters is escalating.

Summary⎙ Print Egypt is seeking to develop ties with South Sudan as its relations with Ethiopia and Sudan deteriorate over the distribution of Nile water.

“Since the secession of South Sudan [from Sudan almost three years ago], Egypt has been trying to get the country into the Arab League to ensure that a language of understanding and communication exists,” an Egyptian diplomatic source at the Arab League told Al-Monitor.

The source, who requested anonymity, spoke of a March 8 meeting toward this end between Nabil Elaraby, secretary general of the Arab League, and South Sudanese Foreign Minister Barnaba Benjamin. “Elaraby requested that Juba have an official presence in the League, to allow for the provision of Arab support that [South Sudan] has requested. A memorandum of understanding was agreed upon for cooperation in the fields of economy, health and education, and there are currently consultations so that it can be signed soon,” he asserted.

“We do not have indicators confirming that South Sudan intends to join the Arab League at this time … but the political problems that worsened after the recent coup attempt led by Vice President Riek Machar reinforced Juba’s demands for Arab aid and support to the political administration led by President Salva Kiir,” he added.

On March 9, South Sudan participated for the first time in a meeting of Arab foreign ministers, held in Cairo. At the gathering Benjamin explained the political situation in his country and sought support in confronting his country’s internal problems. Speaking to Al-Monitor on March 11, during his visit to Cairo, Benjamin said, “We look forward to more Arab support, and we cannot compromise relations with Egypt and [other] Arab countries. We are still a nascent state that needs to open up to all countries of the world.”

Benjamin downplayed the prospects of South Sudan joining the Arab League. “We have no desire to join the [Arab] League as an active member, but we look forward to strengthening [our] Arab relations. President Salva Kiir will soon visit a number of Arab countries, and we anticipate opening embassies in the UAE and Saudi Arabia.”

Egypt has stepped up its diplomatic activity vis-à-vis South Sudan following the recent political tensions in Juba. Cairo participated for the first time in peace negotiations between the parties to the conflict, with Egyptian Foreign Minister Nabil Fahmy offering mediation and political support at talks in Addis Ababa on March 22. Cairo also offered to participate in the UN peacekeeping force to restore stability in Juba, according to a March 23 announcement by a spokesman for the Egyptian presidency, Ambassador Ehab Badawi, following a visit to Cairo by the South Sudanese defense minister, Lt. Gen. Kuol Manyang Juuk.

Col. Philip Oqoir, spokesman for the South Sudan Ministry of Defense, further told Al-Monitor, “There is now military coordination between Cairo and Juba. We agreed to strengthen the capacity of the army in South Sudan through training agreements with the Egyptian military colleges.” He added, “Cairo understands well the challenges faced by South Sudan. We still have problems with developing the army because of the armed conflict and the ongoing fighting with armed militias.”

Egypt’s concern about the political tension and instability in South Sudan stems from its interests in the Nile’s waters. For Cairo, South Sudan is the most important Nile Basin country because of the possibility of implementing projects to increase Egypt’s share of the river’s water by harnessing water currently lost on South Sudanese territory to forests and swamps.

In 1975, Egypt sought to dig the Jonglei Canal, with the hope of it providing 7 billion cubic meters of water annually. The project, however, was halted in the aftermath of the civil war between north and south Sudan, and since then Cairo has not been able to resume work. Furthermore, the Egyptian government is extremely concerned by Juba’s announced intention to join other Nile Basin countries in signing the Entebbe Agreement, which does not recognize Egypt’s historical rights to the Nile’s waters and calls for its redistribution.

According to former Egyptian Water Minister Mohamed Nasreddin Allam, “Negotiations cannot be held with South Sudan regarding projects to increase [Egypt’s] water quota or harness lost Nile water.” He explained to Al-Monitor, “Most of the areas where these projects could be set up — in the Machar Marshes of the Sobat River and the Jonglei areas — are currently conflict zones. Egypt must change its perspective when it comes to carrying out these projects, whereby the goal should include developing local communities in South Sudan, not just harnessing lost Nile water for Egypt’s benefit,”

Although Egypt still hopes to open talks on completing the Jonglei Canal, South Sudan has declared its opposition to the project. The potential negative environmental impact of the project and the possibility of local tribes in the Jonglei region benefitting from it have not been studied, according to a press statement issued by Anthony Kon, South Sudan’s ambassador to Cairo, in September 2013.

Egypt’s current shaky relations with Sudan are also a key factor in the desire to expand ties with Khartoum’s southern rival. Helmi Shaarawy, founder of the Arab and African Research Center, told Al-Monitor, “The main reason for the lack of relations between Cairo and Juba was the government of northern Sudan. [Khartoum] frequently sought to distance Cairo from the issue of the south and isolated it from the secession talks. Now, however, we must revive these relations, after the actions by Khartoum, which takes risks regarding Egypt by supporting Ethiopia, and considerations related to the convergence between [Sudanese President Omar] al-Bashir’s Islamic-oriented government and the ousted regime in Egypt.”

Shaarawy added, “Supporting South Sudan is no longer an option for Cairo. Rather, it is a necessity in light of the impasse and challenges facing Egypt in maintaining its water interests in the Nile, and given Ethiopia’s audacity to build the Renaissance Dam, which could affect water flows to Egypt. Moreover, we cannot let Ethiopia stand alone in its relationship with the Juba government.”

The conflict environment of the war between armed militias in South Sudan is still the main obstacle for Egypt in its efforts to secure its strategic and water interests in the Nile River. Despite statements by officials asserting the strength of the relationship between the two countries, the reality poses challenges for the Egyptian administration in obtaining more water from South Sudan.