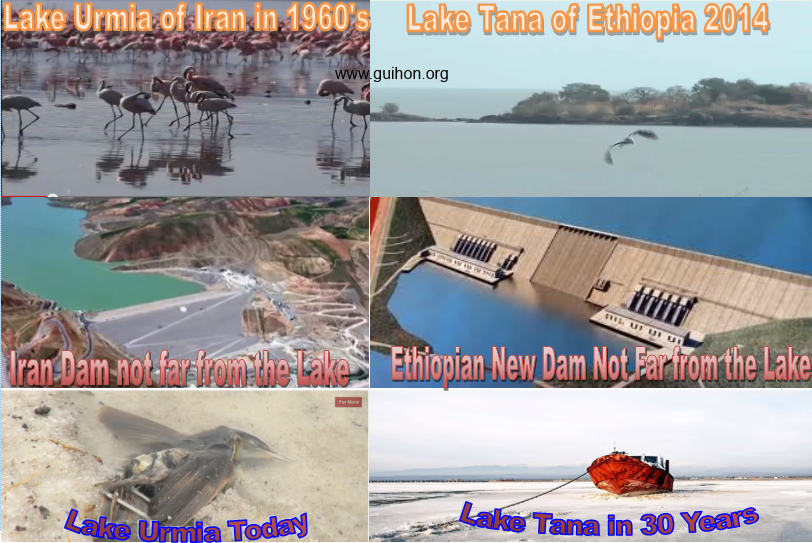 ecocide. The plundering, extensive damage or destruction of fish, forests, water, soil, to endangered species, to ocean and terrestrial ecosystems, to our planet climate threatens the web of life, national security, human mental, physical, environmental and economic well being.  Is the destruction of lake Urmia an act of ecocide A documentary on the Lake Urmia during its time of glory. It is sad to see how this beautiful lake has turned to a salt desert. Note: “Urmia” used to be called “Rezaiyeh” during the Pahlavi Dynasty. …………………………………. Lake Urmia situated between East Azerbaijan and West Azerbaijan provinces in Iran. It is the largest lake in the Middle East and THE SECOND LARGEST salt water lake in the world. Registered as Biosphere Reserve by UNESCO and listed as a wetland of international importance under the 1971 Ramsar Convention, the Urmia Lake holds one of the world’s richest bio-diversity. More than 210 species of birds such as flamingos, pelicans, spoonbills, and gulls, as well as many species of reptiles, amphibians, mammals such as yellow deer inhabit the lake and surrounding. Lake Urmia (Turkish: اورمو گؤلو ,farsi: دریاچه ارومیه‎, Daryache-ye Orumiye)is a salt lake in northwestern Iran, near Iran’s border with Turkey. The lake is between the provinces of East Azerbaijan and West Azerbaijan, west of the southern portion of the similarly shaped Caspian Sea. It is the largest lake in the Middle East, and the third largest salt water lake on earth, with a surface area of approximately 5,200 km² (2,000 mile²), 140 km (87 mi) length, 55 km (34 mi) width, and 16 m (52 ft) depth. Lake Urmia is protected as a “National Park” by the Iranian Department of Environment. Ecology Lake Urmia is home to some 212 species of birds, 41 reptiles, 7 amphibians, and 27 species of mammals,including the yellow deer. It is an internationally registered protected area as both a UNESCO Biosphere Reserve and a Ramsar site.The Iranian Dept. of Environment has designated most of the lake as a “National Park”. Protests for saving Lake Urmia On 2 April 2010 and 2011, and after several callings from Tractor Sazi F.C.‘s fans in stadiums and internet sites, protest demanding that the government take action to save Lake Urmia was held in Tabriz, Urmia, on the lake beach, and on top of the lake bridge. As a result, dozens of people were arrested by security forces. In August 2011, after the Iranian parliament dropped two emergency cases for reviving the lake, a number of soccer fans at Tabriz derby (soccer match between Tractor Sazi F.C. and Shahrdari Tabriz F.C.) were arrested for shouting slogans in favor of protecting the lake. Later that same week, Iranian Turkish(Azerbaijanian Turkish) scheduled a protest against the parliament move. Despite the capture of more than 20 activists by security forces the day before the protest, numerous people attended the event in Urmia and a number of clashes with police were reported. On 3 September 2011, Iranian Turkish(Azerbaijanian Turkish) demonstrated for second week in a row to protect Lake Urmia.The protests in Tabriz and Urmia reportedly followed parliament’s rejection of rescue plan, and security forces used violence to break up environmental rallies as protesters demanded action to save Lake Urmia,and according to West Azerbaijan’s governor at least 60 supporters of the lake were arrested just in Urmia and dozens in Tabriz because – according to an Iranian official – they had not applied for a permit to organize a demonstration. As the protests in Tabriz and other Iranian Azerbaijan cities, Azerbaijani resident in Turkey called for the preservation of saltwater Lake Urmia through a peaceful protest that included pouring salt and lying on the street in front of the Iranian Embassy in Ankara. ———-——— Protest xxxxxxxxxxxxxxxxxxxxxxxxxxxxx http://lake-urmia.blogspot.com