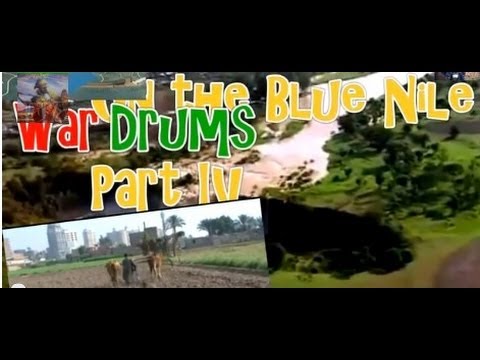 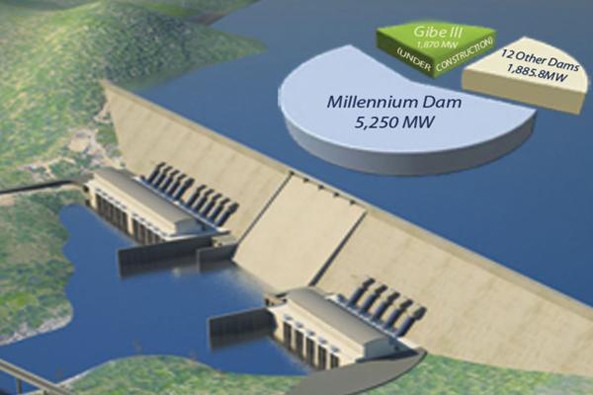 Ethiopia has been having trouble finding finance for its Renaissance Dam. The technologically hazardous and politically incendiary project has failed to whet the appetites of investors though this did not seem to bother the Ethiopian delegation to recent talks.

Instead of admitting that the whole idea is unfeasible, the Ethiopians harangued the Egyptian delegation, claiming that Egypt was wasteful with water, had no right to its full water quota, and should not be channeling water to Sinai or Toshka. The Egyptian delegation sat sheepishly through the meeting.

The Ethiopians claimed they have no intention of building the dam “on the dead bodies of Egyptians”, a meaningless assertion. The fact is they cannot find finance for the dam because — politics aside — the project doesn’t make economic or ecological sense.

The meeting began with the Ethiopians demanding an apology for the ridiculous — and unfortunately televised — meeting between ousted president Morsi and party chiefs. The Egyptian delegation duly complied though if anyone should be offering apologies it is the Ethiopians, and for a number of reasons.

The Ethiopians pressed on, accusing the Egyptians of racism and arguing that Egypt is stealing their water. One even made the fantastical claim that Ethiopia was getting only three per cent of its water resources. 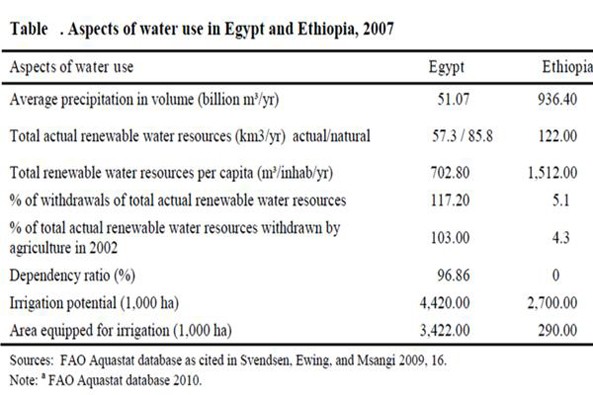 According to an official report from the Food and Agriculture Organisation (FAO) released in December 2012, Ethiopia’s rivers are fed with 122 billion cubic metres of water annually. Of this amount, about 71 billion cubic metres flows downstream via the Blue Nile, Atbarah and Sobat.

Ethiopians left with 51 billion cubic metres — about as much as Egypt receives. I have no idea where the three per cent notion came from.

Aside from river water, rainfall allows Ethiopia to raise 100 million cattle on natural grassland, making it the largest exporter of organic milk in Africa. Because it has the advantage of farming with clean rainwater, not the polluted river water Egypt uses, Ethiopia is high on the listof organic food exporters to Europe.

If anyone is thrifty for water it is Egypt, a country that uses agricultural drainage water, sometimes more than once, and where the population lives on five per cent of the land. Egypt has lost two million feddans to urban sprawl in the past 30 years. No other nation in Africa, or the world, lives on such a small area of its land, something the Egyptian delegation could have told the Ethiopians rather than sitting around and taking the blame. 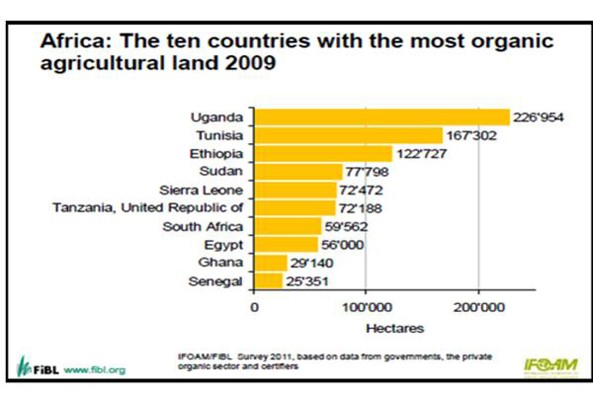 How can you compare a country that has 14 rivers with one that has a single river? Ethiopia has already built 13 hydroelectric dams without a word of protest from Egypt’s side.

To add insult to injury the Ethiopians told our delegation that Egypt was giving water to the rich and depriving the poor. The reference is perhaps to the couple of professional golf courses we have.

The truth is that Egypt uses 80 per cent of its river water for agriculture, an activity that is concentrated in the impoverished countryside where nearly three out of four people are classified as poor. The remaining water is split almost equally between domestic and municipal uses on one hand and industry on the other. So where do the rich fit into this image?

The Ethiopians are angry because Egypt is channelling Nile water to Sinai and Toshka, areas that they claim have no right to get water as they are far from the Nile basin.

The Egyptian delegation didn’t answer that, but I will.

Sinai was connected to the Nile centuries back, through the Pelusiac branch. In fact the area of Baluza in Sinai is named after this branch. There is a valley, called Tina, in Sinai in which 60 per cent of the soil is made up of Nile silt.

The canal to Sinai isn’t operating yet. When it is, it will draw only two billion m3 per year from the Nile water, and an additional 2.3 billion m2 from agricultural drainage. We are not wasting water but preserving it at a rate rarely seen in Africa. There is not one upstream country in the Nile Valley that reuses water, Ethiopia included.

Toshka represents a fraction of the arable land we have lost over the years. As I have mentioned, since 1952 Egypt has lost nearly two million feddans of agricultural land to urban growth. It would only be fair to reclaim an equal amount of land — or more if it is to feed its growing population — elsewhere.

The Toshka project extends over 540,000 feddans. To compensate for the land it has lost, Egypt plans to reclaim one million feddans on the north coast. There is nothing rapacious about this. Egypt’s population has grown from 20 million in 1952 to over 90 million at present while its arable land has diminished over the same period.

Our delegation should have pointed out the above and asked a few questions of its own, such as:

– Why has Ethiopia increased the capacity of the Renaissance Dam from 14 billion m3 before the January 2011 Revolution to 74 billion m3, an increase that doesn’t lead to higher production of electricity or more land reclamation?

– Why did the height of the dam increase to 145 metres from 90 metres?

– What will Ethiopia do with the immense amount of silt that the Blue Nile carries? The water of the Blue Nile is so heavy with silt that it has been rated as one of the least suitable rivers worldwide for damming. The river carries about 245 million tonnes of silt every year, enough to fill it within a few years. The only way to deal with the problem of silting is to build three more dams, the total capacity of which is 200 billion m3. Knowing that the capacity of the Blue Nile is no more than 48 billion m3 per year, the whole thing is bizarre. Why would any country try to store 200 billion m3 of water from a river that brings only one quarter of this quantity every year?

– Why is Ethiopia ignoring the report by the 10-member committee (two representatives from Egypt, Sudan, and Ethiopia, one expert from the UK, France, Germany, and South Africa) about the need for further studies on the ecological and other repercussions of the dam? Experts have pointed out that the dam is likely to lead to the desertification of Egypt, which means that Mediterranean water will inundate the Delta. If the dam is built Egypt’s water supply will drop drastically preventing power generation in the High Dam. Lake Nasser will become irrelevant since Egypt will have no extra water to store.

– What is the reason to build this massive dam with its fantastically large lake?Hydroelectric dams don’t need that much water. Smaller dams, with a lake ranging between eight billion to 14 billion m3 in volume, are more efficient. So what is the point of building a massive dam with an electric generating efficiency as low as 33 per cent, when the efficiency of smaller dams average 66 per cent.

– What if the dam collapsed, a scenario of which a German expert warned? There is a 90 per cent chance that the dam will collapse within the first 10 years of its construction. Is this something Ethiopia is capable of dealing with? Is it offering Egypt — and Sudan — any guarantees against damages?

Ethiopia is acting as if Egypt is threatening its security whereas the opposite is true. Egypt has a responsibility to defend its people. It cannot allow them to starve, go thirsty, or be inundated.

I recall the words of the late Anwar Al-Sadat, who said that if need be we will go to Ethiopia and die there, not die of thirst where we stand.

One way out of the dilemma is for Egypt to allow Ethiopia to go back to the old specification of the dam — with a height of 90 metres and a lake of 14 billion m3. But this must be conditional on the Ethiopians not building future dams on the Blue Nile without prior consent from Egypt and Sudan.

Ethiopia should also apologise for its attempts to impose a fait accompli on downstream countries, something which runs in the face of international law.

The negotiations are continuing, but if this attitude on the Ethiopians’ side persists it will be a matter of weeks before they collapse. In this case Egypt will have to consider taking other measures to protect itself.