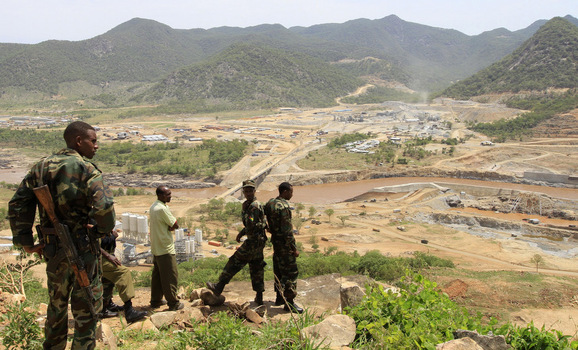 CAIRO — Egypt is still facing multiple hurdles in managing its diplomatic relations and national security interests with other African nations, particularly those of the Nile basin. This is despite the new Egyptian political administration showing capacity to bolster relations with countries of the African continent. But there remains a pent-up crisis engendered by the dispute over the management of the Nile water dossier.

Egyptian-African relations had witnessed some tensions resulting from the overthrow of President Mohammed Morsi, with the African Union suspending Egypt’s membership pending the restoration of constitutional rule and democracy to the country. Furthermore, tripartite negotiations with Sudan and Ethiopia pertaining to the Ethiopian Renaissance Dam were put on hold, as were discussions relating to the problem caused by the Entebbe Agreement.

Egyptian diplomatic circles tried to deal with the crisis by dispatching on July 21 its first official delegation led by Ambassador Mona Omar, the former assistant minister of foreign affairs for African affairs, and 27 other envoys to African Union countries. This delegation represented an attempt to try and convince these countries to change their position favoring the suspension of Egypt’s membership in the union. Furthermore, Foreign Minister Nabil Fahmi made his first trip abroad on Aug. 19 to Khartoum and Juba carrying a message expressing Cairo’s desire to bolster relations.

Omar, Egypt’s presidential envoy to a number of African nations, told Al-Monitor that the African Union had not yet taken any concrete measures to lift its decision to suspend Egypt’s membership. She explained that the second visit by the African Union’s Panel of the Wise did not bode well for Egypt, with the former only succeeding in issuing some general recommendations in rejection of violence and towards the attainment of internal peace.

The Panel of the Wise, led by Alpha Oumar Konaré, had concluded its second visit to Cairo on Wednesday, Sept. 4, during which it affirmed Egypt’s ability to solve its problems, and that the matter of suspending the country’s membership in the African Union was not aimed at excluding it from the African arena. It did not, however, identify specific measures that would result in discussions aimed at reinstating Egypt’s membership in the union.

“The Panel of the Wise was not tasked with taking decisions about reinstating Egypt’s membership, and only made recommendations based on the results of its visit, upon which the African Union’s General Assembly would vote,” Omar said. She added that “it was not in Egypt’s interest for a vote to be taken at the present time, and it was necessary for the new Egyptian leadership to implement part of the road map and agree on a new constitution, in order to prove Egypt’s commitment to democratic norms.”

The spokesman for the Ministry of Foreign Affairs, Ambassador Badr Abdel-Ati, told Al-Monitor that Egypt would continue its diplomatic efforts aimed at proving its seriousness in restoring Egyptian-African relations.

He pointed out,  “Egyptian presidential envoys have visited 35 countries in order to explain the current state of affairs in Egypt.”

Despite Egypt’s efforts to bolster its relations with other African countries, the issue of water allocations remained at a standstill during discussions pertaining to the Nile basin dossier, which continued to cause tensions between downstream states Egypt and Sudan and their counterpart upstream countries. These tensions increased as Ethiopia began building its Renaissance Dam over the Blue Nile, which constitutes a direct threat to Egypt’s water interests in the river Nile.

For the third consecutive time, Ethiopia and Sudan asked for the postponement of the tripartite meeting scheduled to take place between water resource ministers of eastern Nile countries. This led to the rescheduling of discussions pertaining to the final report issued by International Panel of Experts at the end of its last meeting in June. The report discussed the ramifications of the Renaissance Dam on the water security of Egypt and Sudan.

Sharif al-Mohammadi, an Egyptian expert with the international panel, told Al-Monitor that more negative consequences would ensue as a result of postponing discussing the final report on the effects of the Renaissance Dam, at a time when the Ethiopian government was moving ahead to finalize the initial phases in preparation for beginning dam construction.

“While no new meeting date was set for consultations between the Egyptian, Sudanese and Ethiopian ministers of water resources, there was a general agreement on the need to continue negotiations about the dam, and the need to intensify political efforts meant to reach a solution that satisfied all parties,” Mohammadi said. He explained that the new government had adopted the same methods and negotiating stances that the old regime had used.

Ethiopia has already finished construction on 25% of the Renaissance Dam in the Benishangul region, about 40 kilometers [25 miles] from the Ethiopian-Sudanese border. The dam is designed to generate 5,500 megawatts of electricity at a cost estimated to reach $4.5 billion. Upon its completion in 2017, it will be the largest hydroelectric dam in Africa, and the world’s 10th-largest electricity-producing dam.

The Minister of Water Resources and Irrigation, Mohamed Abdul Muttalib, said in an interview with Al-Monitor that the council of ministers was in the process of laying down a comprehensive strategy to deal with the Nile dossier. “It had also adopted a plan to implement the recommendations contained in the International Panel of Experts’ report, which evaluated the effects resulting from the building of the dam, and which will be implemented once Khartoum overcomes the flood crisis that it currently has to contend with,” he added.

Egypt is yet to resolve the dispute arising from the Framework Convention for the Nile Basin, known in the media as the Entebbe Agreement, which was ratified by Ethiopia and Uganda, while the newly formed government of South Sudan expressed desire to join the agreement.

Despite Juba announcing its desire to join the Entebbe Agreement, Egypt has sought South Sudan’s assistance in mediating with other states over the dispute. “We asked President Salva Kiir Mayardit, during the Egyptian foreign minister’s visit to Juba on Aug. 20, that South Sudan, in its capacity as current president of the Nile Basin Imitative, play a mediating role to revive negotiations pertaining to the Entebbe Agreement,” Ayman el-Gammal, Egyptian ambassador to South Sudan, told Al-Monitor.

“South Sudan’s accession to the agreement, upon which Egypt has reservations, will be a hurdle towards finding a framework for compromise,” Gammal added. He clarified that South Sudan’s reply was that “its accession to the agreement would not become official for another three months, when parliament approves the move,” adding that “the South Sudanese government had expressed a measure of contentment towards the recent developments that took place in Egypt.”