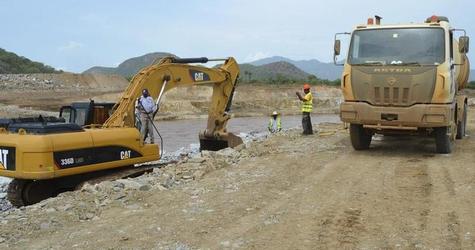 By Syed  Hussain
Egypt’s new stimulus package highlights a major issue facing the country: rising need for water and power infrastructure in the country.
The USD 3.2 billion program included sorely-needed investments in 131 potable water and sewage treatment plants, as the arid country looks to address its water scarcity issue on top of all the other economic trouble it faces.
While Egypt’s electricity infrastructure is better than most other African nations, the country’s power needs are expected to rise 6% till the end of the decade due to demographic pressures. In addition, agriculture produce demands a steady flow of water to ensure that the country’s large food import bill is reined in.

But the rising demand for food and water may not be met due to a whole host of factors, including lack of resources and developments along the river Nile that could have dire consequences for the country.
“Egypt remains politically and economicallyunsettled andthis is likely to affect the water sector in various ways – on the one hand funds are limited, however on the other there is a great deal of public pressure on the government to ensure the provision of basic affordable amenities like drinking water,” said BMI in its recent report on the country’s water needs.
“Further pressures stem from the continuinginternational debateover Ethiopia’s dam project which would threaten Egypt’s Nile resources.BMI is confident that the short-term future of the water market remains secure and lucrative – yet the long-term future of the nation remains precarious, and increasingly dependent on fickle foreign investment and resources.”

THE GREAT ETHIOPIAN PROJECT
More than 90% of Egypt’s energy consumption is being met by oil and natural gas – which makes a huge demand on its import bill.
In terms of electricity generation, natural gas represents over 80% of the total mix, the remainder being met mostly by hydroelectricity.
“Electricity in Egypt is generated mainly from thermal and hydropower stations,” according to the African Development Bank. “However, the percentage of hydropower energy generated is gradually reducing due to the fact that all major hydropower sites have already been developed and new generation plants being built are mainly gas fired.”
Indeed, there seems little scope for hydroelectricity expansion,especially in light of new developments along the river Nile.
While Egypt has been distracted with internal political disputes, other countries have moved ahead in taking advantage of the Nile basin.
Ethiopia is building the Grand Ethiopian Renaissance Dam (GERD), a USD 4.3 billion 6,000 megawatt hydropower plant set for completion by 2017-2018.
Located in the Benishangul-Gumuz region, 40 kilometers from the border with Sudan, the project is the centerpiece of a string of dams that could transform Ethiopia into a major energy exporter.
But the controversial project threatens an agreement brokered by Great Britain in 1929,which granted Egypt veto power over projects that could change the flow of the river Nile.
In addition, Sudan and Egypt had signed an agreement enacting water usage quotas for the Nile’s water in 1959. Under the agreement, Egypt has a quota of 55.5 billion cubic meters per year and Sudan has a quota of 18.5 billion cubic meters per year.

But the Entebbe treaty signed by Ethiopia, Uganda, Rwanda, Burundi, Tanzania, Kenya and South Sudan, on May 19, 2010 has the potential to make the previous deal redundant.
The treaty gives each of its signatories a fair and reasonable access to the water resources to use for their economic benefit, which would eliminate Egypt’s access to 55.5 billion cubic meters of water per year.
Ethiopia had unveiled the GERD project a month after Egyptian leader Hosni Mubarak was ousted in a popular revolt in 2011, leading many analysts to think the timing was not coincidental and was meant to push the project ahead just as Egypt was preoccupied with other pressing matters.
The project is expected to be Africa’s largest hydroelectricity dam,but has already raised huge concerns among Egyptian and Sudanese authorities, who have objected to the project in the strongest possible terms.

SPECULATIONS OF MILITARY ACTION
The deposed president Mohammed Morsi has been on record saying that Egyptians will “defend each drop of Nile water with our blood”.
But given that the dam will not be completed until around 2018, Egypt is not under pressure to make an immediate decision over whether to launch a strike, said Ben Peyton, head of Africa Practice at Maplecroft, a global risk analytics, research and strategic forecasting company.
“Yet military action is certainly an option that many of the key figures within Egypt’s security apparatus would like to seriously consider, not least because a successful strike would help rally nationalist support for the military-dominated government.”
However, it is unclear if Egypt has the political appetite or the international support to pursue this developmentin the midst of a severe domestic economic and political meltdown.
“Indeed, the security forces are already stretched as a result of the domestic situation and the regime is likely to be reluctant to completely burn its bridges with Washington by attacking a key US regional ally,” Peyton said.
While Egypt and Ethiopia had been looking for constructive dialogue to resolve their dispute during Morsi’s tenure, it is unclear how the new interim governments and subsequent government view the issue.
Morsi and Ethiopia’s prime minister Hailemariam Desalegn had even discussed the idea of Egypt funding a transmission line from the dam, with Ethiopia selling 2,000 megawatts of power to Egypt by 2020, according to Getachew Reda, a spokesman for Hailemariam.
However, Ethiopia’sdecision to divert the Nile immediately after a meeting between the two officials has taken Egypt by surprise.
“Perhaps most alarming to Egypt was not the announcement itself, but rather how quickly Ethiopia announced the diversion after the meeting,” said risk consultancy Stratfor Inc. in a note.
THE CONGO RIVER PROJECT

The construction of Ethiopia’s controversial Renaissance Dam project has meant that another project conceived more than a century ago will remain on the backburner.
The project was suggested by an Egyptian irrigation engineer as far back as 1902, but was taken up by former president Anwer Sadat in the 1970s as he believed dam-building was vital to moving the economy towards industrialization and managing the water flow from the Nile, which vacillated from flooding of agriculture lands to crippling droughts.
The 4,500-kilometer Congo River has the potential to supply Egypt with over 100 billion cubic meters of water, out of the trillion cubic meters that flow into the ocean yearly, according to Ismail Abdul Jalil, former president of the Desert Research Center.
According to Egypt’s minister of agriculture, Ayman AbouHadid, researchers proposed the project to prime minister Issam Sharaf’s interim government to prevent Egypt from facing a water shortage as a result of the Renaissance Dam.
The former prime minister saw in it an opportunity to turn more than 60% of Egypt to an agricultural land, but subsequent political events prevented any further discussion.
“This project is a major technical challenge as it requires rerouting the river against its natural flow.It also requires the approval of South Sudan, which is a signatory of the Entebbe Treaty, making any discussion of the project very difficult,” AbouHadid said.
“This should not discount the idea that constructing the dam is now a viable possibility.”
The project could save Egypt from a long-term drought and while interest in the project has been renewed after Ethiopia’s Renaissance project, officials believe the development will remain mothballed for some time.
NOT ON THE TABLE YET
Egypt’s ministry of water resources and irrigation is not currently considering the Congo River project, to replace the water shortage that might occur as a result of the construction of the Renaissance Dam, an official source told Zawya.
“It is difficult for the current transition government that has limited power, to make the final decision on such a large, long-term project,” said Mohamed Abdel-Mottaleb, Egypt’s minister of water resources and irrigation, in a statement to Zawya.
“Furthermore, the speed of the river flow presents a major technical challenge, especially the building of the water pumping stations; it is not a decision to be rushed.”
It would also be considered hostile to make such an announcement, while negotiations with Ethiopia around the Renaissance Dam are still under way.
“The government is still committed to resolving the issue of the Renaissance Dam, and it would be inappropriate to talk about pressure means in the midst of diplomatic efforts,” he said.
“The situation is very delicate, especially now that Egypt’s membership in the African Union was suspended after Morsi was removed from power. Hence, we are very careful on how to approach this issue and we are very serious in our reassurance messages to the African Union.”
In addition to the negotiations, the government will be meeting with the technical committee overseeing the Renaissance Dam project to discuss its details. “The project is no doubt ambitious, however, there is currently no feasibility study to determine its cost which is an additional issue influencing the decision,” he added.
Nasr EldinAllam, former minister of water resources believes the Congo River project is impossible to implement.
“In addition to the technical and financial difficulties, we will be facing major political challenges, he said. “Rerouting the river stream will require an approval from all the affected countries and there is currently no agreement if the Congo River belongs to Congo or is an international river.”
He also emphasized the importance of acquiring approval from South Sudan which is difficult, especially as the project could flood its land. Furthermore, the agreement South Sudan signed with Israel last year involves plans to cooperate on water and irrigation projects would make it reluctant to approve the project.
HUGE IMPACT ON FOOD SUPPLIES
With the Congo River project on the backburner, Egypt will be severely impacted by the Renaissance Dam.
Analysts say there will be a short-term drop in water flowing into Egypt while the reservoir is being filled – a process that could take several years.
Depending on the extent of the shortfall, agricultural productivity in areas that rely on the Nile for irrigation could well be affected, which could result in higher spending on imported food and other agricultural commodities and could potentially drive up rural unemployment, according to Maplecroft.