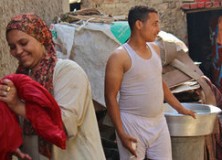 A man in the Ramlet Boulak neighborhood of Cairo, Egypt, walks around with a bar of soap and water tub looking for enough water to bath.
AMINA ISMAIL / MCT

The towering luxury office buildings that hover over the impoverished neighborhood of Ramlet Boulak used to blatantly symbolize the divisions between Cairo’s wealthy and its poor. Now the scene captures the closing gap between rich and poor, at least as it applies to the persistent shortages of electricity, water and gas that have swept across Egypt.

On a recent Sunday, a resident of Ramlet Boulak carried around a bar of soap looking for enough water to shower, while his wife used what little water they’d found to wash their clothes in tin buckets. Meanwhile, some of the businesses in the high rises were relying on generators when the power inevitably cut out; the rest went hours without power, losing money with every passing minute.

The issue of energy consumes both life and politics here. On the streets, both the rich and poor find that markets struggle to keep foods fresh and often close for lack of power. Miles-long lines of trucks snake toward gas stations in search of gasoline. Farmers lack power for irrigation. The shortages have cost the faltering economy an estimated $14 billon and threaten an already fragile political situation.

Basic services have become the most important issue of the day, exposing the limitations of Egypt’s first democratically elected government and making life here even more precarious.

“People had very high expectations and aspirations during the revolution, so if they become very frustrated you never know what will happen or how will people react. This could lead to more violence,” said Omina Helmy, the acting executive director and director of research at the Egyptian Center for Economic Studies. “We really have to take care and find solutions, we can’t keep on fighting over politics. People cannot eat politics.”

Egyptian President Mohammed Morsi has promised to improve electricity, gas and water supplies, and he told Prime Minister Hesham Kandil, a water expert, to examine the issue. In recent days, as the June 30 anniversary of Morsi’s ascent to power approaches, there has been some improvement. But even that has fueled more complaints about Morsi’s competence as Egypt braces for massive protests by his opponents.

The shortages have led to increasingly vitriolic language from Egyptian leaders. Amid fears that Ethiopia is building a $4.2 billion hydroelectric dam that could cut off water to Egypt, Morsi gave a defiant speech warning Ethiopia that “all options are open” if Egypt’s share of the Nile River is affected. “If one drop of water is lost, our blood is the alternative,” he said.

A week earlier, Egyptian politicians scheduled a meeting to discuss their response. Unaware that the meeting was televised, Younis Makhyoun, a senior leader of an ultraconservative Islamist party, said that Egypt should back rebels in Ethiopia as a bargaining chip or destroy the dam.

Ethiopia’s Ministry of Foreign Affairs demanded an official explanation from Egypt, then ratified the project. The outbursts forced Egypt’s foreign minister to rush to Addis Ababa to try to repair relations.

While Egypt had spurts of service problems during former Egyptian President Hosni Mubarak’s regime, the situation has gotten worse since his fall two years ago. In the year since Morsi ascended to the presidency, it’s gotten even worse – the $14 billion economic loss tied to power shortages is in just the last six months, economists say.

At the Shobra el Kheima electricity plant in northern Cairo, one of the nation’s 55 such facilities, Sayed Shadada, 49, a 29-year veteran at the plant, called what is happening now the worst he’s seen.

“It all started after the revolution,” Shadada said.

The explanation for what has happened is a combination of factors. The 2011 revolution disrupted an already broken electricity sector. Natural gas production declined. A drop in the number of tourists dried up foreign currency income, cutting the value of the Egyptian pound and hindering the government’s ability to pay for fuel, whether imported or produced locally by international oil companies.

Moreover, the deteriorating security problem has made it harder to secure plants. Egypt’s minister of electricity told the state-owned al Ahram newspaper earlier this month that two power plants, one in Banha in Egypt’s northeast corner and the other at Ain el Sokhan, about two hours east of Cairo, are ready to operate but cannot because the government cannot provide the personnel to protect them.

All the while, consumption is increasing.

According to official figures, Egypt’s national electricity consumption is expected to rise to 29,500 megawatts per day by summer even as the country only produces 27,000 megawatts a day. From 2000 to 2010, electricity production grew an average of 4 percent per year; consumption grew at an annual rate of 5.2 percent, Helmy of the Egyptian Center for Economic Studies told al Ahram.

The impact can be seen in the city’s industrial parks, where extended power outages have meant layoffs as factories can’t operate.

The impact is felt at the household level, too.

“The fluctuating current ruins my electric appliances. And if something is ruined, I am poor and I cannot replace them,” said Mirfet, 40, a nurse who refused to give her last name (“I don’t want any trouble”) while working at the Menya al Amh hospital near Morsi’s hometown, Zigazig, just north of Cairo.

Egypt now depends on oil-rich countries like Qatar, Libya and Kuwait to provide fuel. But the amount is still not enough to run power plants at full capacity and meet summer demand.

Earlier this month, the government announced that Egypt had received a shipment of natural gas from Qatar to alleviate the problem. In many cities, people felt an improvement almost immediately, with power staying on. But the respite lasted just two days before power outages started again.

Aktham Abou-Elella, undersecretary of state and the spokesman for the Ministry of Electricity and Energy, said solving such problems would take at least four years.

Until then, the government has asked people to be patient.

“I apologize to all the people for having such problems,” Morsi was quoted as saying in an interview with al Ahram. “God willing, people should excuse us. We are doing our best.”