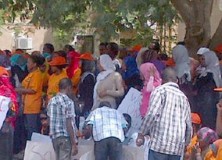 The protesters, members of the Oromo tribe who fled Ethiopia due to political and ethnic persecution, also spoke out against Ethiopia’s Renaissance Dam.
Abdel-Kader Goumy, one of the protesters, told Al-Ahram’s Arabic language news website that the Renaissance Dam is intended to generate electricity, and, as such, there is no reason it should be built on the Nile, rather than on Ethiopia’s other rivers.
“The tribe supports Egypt’s right not to be adversely affected [by the dam]… Addis Ababa is not in need of water, rather it aims to build the dam for political purposes,” he added.
Yehia Mohamed, another Ethiopian refugee belonging to the Oromo tribe, said, “Sunday’s protest comes after we have suffered harassment by some Egyptians due to the Ethiopian government’s decision to build the Renaissance Dam.”
Mohamed explained that the Oromo have sought political asylum in countries such as Egypt, Kenya, and Somalia in order to flee sectarian persecution.
He also added that the Ethiopian government excludes the Oromo from all decision-making, including the decision to build the Renaissance Dam.
Protesters lifted Egyptian and Ethiopian flags, declaring their refusal to support a dam that will “damage Egypt and will not help Ethiopia.”
On Wednesday, Egypt will demand that Ethiopia halts building on the dam, according to Reuters, citing a senior Egyptian government aide. If so, this will ramp up confrontation over a project that Egypt fears will affect its main source of water.
Ethiopia set off alarm bells in Cairo last week when it began diverting a stretch of the Blue Nile to make way for the $4.7 billion hydroelectric plant.
The Nile riparian countries have argued over the use of the Niles’ waters for decades – and analysts have repeatedly warned that these disputes could boil over into war.
The high stakes around this issue were highlighted Monday when senior Egyptian politicians were caught on camera advising President Mohamed Morsi to take hostile action against the project. One advisor went on to suggest that Cairo destroy the dam.
Egypt, which has been involved in years of troubled diplomacy with Ethiopia and other upstream countries, said Ethiopia must halt work on the dam.
“Demanding that Ethiopia stop construction of the dam it plans to build on the Blue Nile will be our first step,” said Pakinam El-Sharkawy, the presidential aide for political affairs, in comments carried by the state news agency MENA.
“The national committee that will be formed to deal with this issue will determine the steps that Egypt has to take,” she explained.
The Oromo make up 35 percent of the population in Ethiopia.