Is the post-revolution change in Egyptian leadership bringing about a shift in foreign policy towards the nations of the Nile Basin? 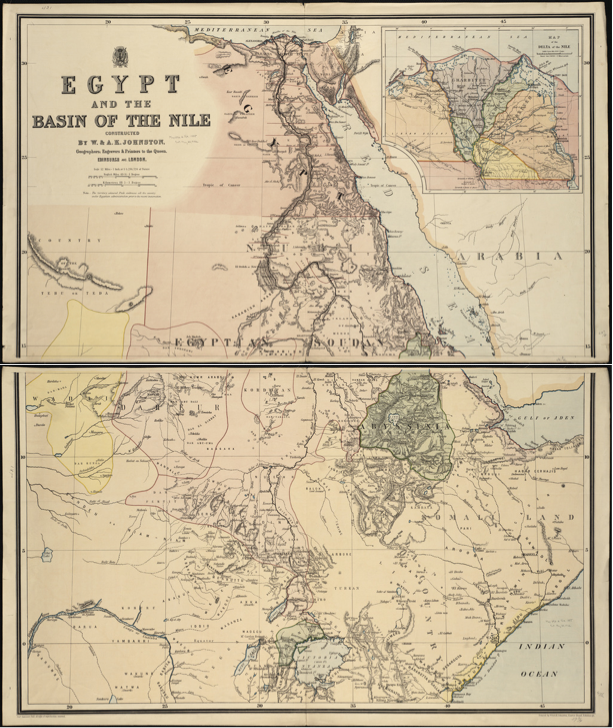 The Disputed Nile: Will the region share water or bloodshed? Photo by the Normal B. Leventhal Map Center at the Boston Public Library via Flickr.

The Nile River is a resource strained to its limits on both sides of the equation – supply and demand. On the supply side, climate change trends and the rising temperatures around the globe are increasing water loss due to evaporation. The demand side, if anything, is less forgiving. The population of the three largest nations through which the Nile River flows is expected to reach 250 million by 2015. This will increase demand for fresh water needed for agriculture, industry and public consumption. These needs are also increasing as economic growth increases prosperity and citizens demand more of everything.

As the supply of water declines and demand increases, the resulting water shortages will exacerbate the region’s already dire humanitarian conditions and could lead to conflict, which could adversely affect the flow of oil through the Red Sea and in turn the global economy. One need not look back far to observe how differences of opinion over rights to water may lead to conflict: in 1964, the Israeli army struck an Arab project meant to divert water from the Sea of Galilee when it challenged a similar Israeli project. In fact, tensions over access to water in the region may well have been one of the causes of the 1967 war.

Egypt has always responded with threats of military intervention if interference with the flow of the Nile affected the amount of water that reached Egyptian borders. In 1980 Egyptian President Anwar Sadat said in response to Ethiopian complaints of Egyptian water exploitation that “if Ethiopia takes any action to block our right to Nile water, there will be no alternative for us but to use force. Tampering with a nation’s rights to water is tampering with its life”.

In 1990, Israeli engineers were discovered investigating the feasibility of constructing three dams in Ethiopia. Egypt’s deputy prime minister for foreign affairs, Boutros Boutros-Ghali, warned that any obstruction of the flow of water reaching Egypt would be considered an act of war. Mubarak and his successive governments were not in any way more forgiving than their predecessors; as recently as 2010, he demanded veto rights on any projects in Nile Basin countries that might affect Egypt’s share of the water.

Threats of war aside, pre-Arab Spring Egyptian foreign policy towards the Nile Basin nations was always one of neglect when compared to Egypt’s generally cooperative relationships with its other neighbours. One look at levels of trade, for example, would show that the value of Egypt’s trade with the 11 Nile Basin nations was approximately US$500 million (£310 million) from 2005 to 2008, compared with almost US$700 million (£434 million) in trade with Israel and Libya alone, its neighbours to the east and west respectively.

This is surprising given the tremendous opportunities that Nile Basin nations offer as trade partners for Egypt. During the Nasser years, Egypt invested heavily in cultivating strong trade relationships with the nations of the Nile Basin with a view towards increasing its soft power in the region. In the absence of strong trade, Egypt’s relationship with the nations with which it shares the Nile has been defined by conflict over sharing the river’s water.

However, since the fall of the Mubarak regime in February 2011, Egypt’s approach towards Nile Basin nations has taken a turn for the better with the announcement of the resetting of relations with Ethiopia, its leading adversary in the restructuring of the water sharing agreements of the Nile River. Egypt has also been sending representatives on diplomatic missions to all the nations of the Nile Basin the name of cooperation and mutual development. In a public initiative, Egyptian presidential candidates, representatives of political parties and numerous public figures visited Uganda and Ethiopia to discuss the new water sharing agreement. Shortly after, Egypt’s interim prime minister took the same journey and managed to gather consensus on the formation of a committee of Egyptian, Sudanese and Ethiopian experts to assess the effects of Ethiopia’s new dam on the flow of water to Egypt and Sudan.

This surge of interest in cultivating stronger relationships with the nations of the Nile Basin is likely the result of Egypt feeling vulnerable in a post-Mubarak world. Mubarak’s policy towards the Nile was clear: there was to be no compromise or change. This is not surprising given his domestic policy. However, without Egypt’s so-called “paternal” leader to make decisions on its behalf, soft power and cooperation seem to be the way forward. This is a good sign. As water becomes scarcer, mutually beneficial agreements to better manage the Nile’s water are necessary: without a shared vision, armed conflict would be inevitable.