The six African presidents who signed the Entebbe Agreement
By Alternative News
Newscast Media ENTEBBE, Uganda—Egypt’s new president, Mohammed Morsy, is making the discussion of the Entebbe Agreement a priority on his agenda this month. Sources informed Egypt’s paper Al-Masry Al-Youm that President Mohammed Morsy will visit Addis Ababa, the capital of Ethiopia, following his visit to Saudi Arabia on Wednesday. Ambassador Mona Omar, assistant foreign minister for African affairs, stressed the importance of Morsy’s participation in the next African Summit.
“President Morsy’s participation at the summit is a message to Africa and the world, stating that Egypt, in the era of the [second] presidency, intends to play an influential and active role in all African issues,” the ambassador told Al-Masry Al-Youm.
According to Omar, the president is expected to hold bilateral meetings with many African leaders at the summit, including Ethiopian Prime Minister Meles Zenawi. She pointed out that after the January 25 revolution, Zenawi announced the signing of the Entebbe Agreement, which would govern the division of Nile water, would be postponed until a new president is elected in Egypt. The agreement was signed by six Nile Basin countries, but rejected by Egypt and Sudan.
The Entebbe Agreement, which is also called the Cooperative Framework Agreement (CFA) was signed by the following countries: Uganda, Kenya, Tanzania, Ethiopia, and Rwanda, then on February 28, 2011, Burundi became the sixth signatory. Egypt argues that both the 1959 agreement, as well as another accord signed in 1929 under British rule, stipulate that the approval of all Nile Basin states must be gained before the implementation of any water-utilization projects.
However, the six countries that signed the Entebbe Agreement rejected such reasoning, and reminded the Egyptians that the 1929 and 1959 agreements were void and invalid because they were written and ratified under British colonialism by colonialists. The recently-revised Entebbe Agreement that was signed on May 4, 2010, was written by native, full-blooded Africans.
The 1929 agreement gave Egypt veto-power over any project being built along the Nile, and also gave it the lion’s share of the waters. Ethiopia, for example, has been able to utilize only 0.65 percent of the water resources of the Nile basin even though it contributes 86 percent of the Nile waters. The upper White Nile riparian states, namely Kenya, Uganda, Tanzania, Rwanda, Burundi and the Democratic Republic of Congo, together use less than 0.05 cubic kilometers of the waters of the Nile. Compared to the 55.5 cubic kilometers used by Egypt, it is safe to conclude that these states haven’t even begun using the Nile.
As an act of defiance against the agreements written by British colonialists, the Ethiopians, in 2011 announced plans to build the controversial “Great Millennium Dam” one of the biggest dams in Africa, with a capacity to produce 5,250 megawatts of electricity. Research and construction plans of the dam started without delay, about 45 kilometers from the Sudanese border. Egypt then demanded the submission of technical and environmental studies for the proposed dam, and eventually dispatched an Egyptian high-level delegation that arrived in Addis Ababa to inspect the plans. Egypt even warned that it would resort to pressure by the international community or even consider military action if Ethiopia failed to reply.
Upon receiving the message, the Ethiopian government laughed at the threats, and dared the Egyptians to make them (the Ethiopians) reveal the plans. Realizing the Ethiopians weren’t playing games, Egypt backed off, and Reuters news agency reported the hysterics between the two countries here.
According to an essay written by Abadir M. Ibrahim, of St. Thomas Law School, who is a graduate and scholar of Human Rights Law, Constitutional Law, Administrative Law, Private International Law (Conflict of Laws), and Legal History, the hydro-politics of the Nile is dominated by Egyptian hegemony played out in the spirit of controlling and owning the Nile rather than that of regulation or cooperation.
In his essay, The Beginning of the End of Egyptian Hydro-Political Hegemony, Ibrahim writes that due to Egypt’s monopoly over the Nile, and the fact that Ethiopia is the most voluminous contributor to the waters of the Nile, the realpolitik of the river has mostly been played-out between the two states and to some extent with Sudan. The seriousness of the mistrust of these states is reflected in that not only is the Nile an object of nationalistic sentiment in these countries, but it has also entered the mythological beliefs of their populations and political leaders. Abundant literature exists on Ethiopian folk-tales relating to the possibility of turning Egypt into a desert by cutting off the waters or the Nile.Continue to Part II–The Nile River and The Entebbe Agreement >> 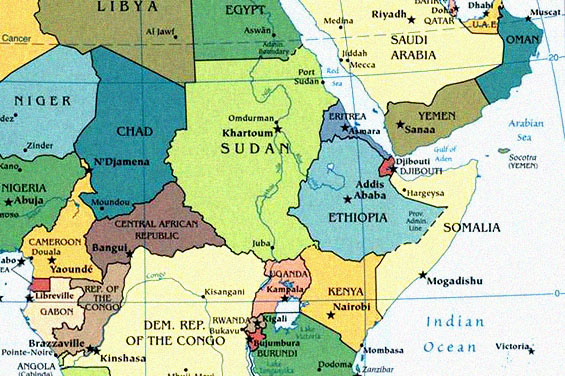 Nile River Basin Countries
by Joseph Earnest  July 8, 2012
Newscast Media ENTEBBE, Uganda—Ethiopian Emperors have never been timid when they threatened to cut off the Nile if their demands were not met. Those on the other end of these threats did not for a moment doubt that the Ethiopian Emperors were able to turn off the taps of the Nile. In his well-written and interesting essay, Ibrahim continues to say that the hegemonic policy of Egypt had not changed by twentieth century.
A Swiss affiliate to King Khedive Ismail of Egypt, Werner Munzinger, had once remarked that; “Ethiopia . . . is a danger for Egypt. Egypt must either take over Ethiopia and Islamize it, or retain it in anarchy and misery.” Egypt had attempted the first in 1832 and 1882 but failed. In today’s world, an invasion is unlikely since the use of force in international relations is strongly condemned.
At different occasions Egyptian top officials affirmed their strong will to intervene with force to any disruption of the status quo. In 1979 Anwar Sadat, then President of Egypt, said immediately after signing the peace treaty with Israel that “the only matter that could take Egypt to war again is water.” At another occasion he lashed out, “Any action that would endanger the water of the Blue Nile will be faced with a firm reaction on the part of Egypt, even if that action should lead to war.” Boutros Boutros Gahali, when he was the Egyptian Foreign State Minister, confirmed the same conclusion when he said “the next war in our region will be over the water of the Nile, not politics.” You may read or download the entire essay here. (pop-up)
According to Institute for Security Studies (ISS), the most controversial provision of the CFA is  Article 14 (b) of the CFA, which reads: “not to significantly affect the water security of any other Nile Basin State’.  Egypt and Sudan proposed that the article should be reworded as: “not to adversely affect the water security and ‘current uses and rights’ of any other Nile Basin States”.
The problem the six states have with the phrase ‘current uses and rights’ once again stems from the fact that those rights were granted during the colonialism era, which is a bygone era.
Egypt’s concern about the Nile being affected by the new agreement is addressed in Article III section 1. of the agreement that states: “The Nile River System and its waters shall be protected, used, conserved and developed in accordance with the following general principles: (1). Cooperation—The principle of cooperation between States of the Nile River Basin on the basis of sovereign equality, territorial integrity, mutual benefit and good faith in order to attain optimal utilization and adequate protection and conservation of the Nile River Basin and to promote joint efforts to achieve social and economic development…”
Ethiopia and other countries that are party to the agreement are developing projects pursuant to the same Article III section 6, that states:
Article III § 6—The right of Nile Basin States to use water within their territories: “The principle that each Nile Basin State has the right to use, within its territory, the waters of the Nile River System in a manner that is consistent with the other basic principles referred to herein.”
During the colonial period, Britain effectively controlled the Nile through its military presence in Africa. However, Sudan and Egypt signed another agreement in 1959 giving Egypt the majority of the water flow, while ignoring all the other countries within the Nile Basin.
Article 19, Article 20, and Article 21 of the Entebbe Agreement override the colonial agreements allowing the once-ignored countries to exercise more control over the Nile.
Article 19 states: Legal Status—The Commission is established as an intergovernmental organization and shall enjoy international legal personality, with such legal capacity as may be necessary for the performance of its functions, in particular, the capacity to enter into agreements, to incur obligations, to receive donations, and to sue and be sued in its own name.
Article 20 section 2 states: The Conference shall establish its own rules and procedures.
Article 21 states: Functions—The Conference shall be the supreme policy-makingorgan of the Commission.
Egypt’s Mohammed Morsy realizes a war against Ethiopia is a war against all other states within the Nile Basin. The most reasonable thing Morsy can do is attend the African Summit and resolve the Nile Basin conflict diplomatically.
The Nile is regarded as the longest river in the world stretching a distance of 4,130 miles, running through ten countries. The source of the Nile River is Lake Victoria, specifically in Jinja—Uganda, contrary to what fraudulent historians claim. Up North in Ethiopia, another section of the Nile called the Blue Nile originates from Lake Tana. The Nile gets its name from the Greek word “Nelios”, meaning River Valley.